The render pipeline refers to the order in which we first submit data to render, then bind the shaders and finally draw the triangles before switching the buffers. The more optimized the pipeline, the faster we are able to send data to the GPU, which results in higher frame rates and more responsive games. Currently, in the engine, we are binding an effect every time we are drawing an object(which is every draw call). This might not make any impact for small games like mine, but for any moderately sized game, this starts to become a bottleneck.

So, the first thing we need to do is to figure out a way of not binding effects for every draw call i.e., we need to bind an effect once and then draw all the meshes which are using that effect. The way we can accomplish this is by using render commands. Render commands are essentially unsigned integers which represent a rendering operation. There can be many types of render commands such as one for drawing, one for transparency etc. The render command that we use in this assignment is for drawing an object.

I am representing a render command as an unsigned 64-bit integer mainly because of the number of bits such data type can provide. As you will see below, we need as many bits as possible to create render commands, so that we can effectively store data for a particular one. When storing data in a render command, the order is important. The objects which have the highest priority are sorted in MSB and the least are stored in LSB and when we sort all the similar render commands will be sorted from lowest to highest.

Since we need to only bind effect once, it has the highest priority and hence goes in the MSB. We need to make sure that we have enough bits to store all the possible effects we could have in game. I am using 7 bits for effects, which gives me around 128 effects that I can have. The data I am storing for effects is the index at which the effect is stored by the manager. This is similar to how I am storing the meshes in the render command too. Since meshes are not that important for sorting order, I am storing them in the last 7 bits of my render command.

Also when drawing objects, the objects that are closer to the camera must be drawn first compared to objects which are farther. So, we calculate the z-depth from the camera to each object and the scale it with respect to the number of bits we are allocating and then store the value in render command. This has the second highest priority after effects. So, my final render command structure looks like the following.

After storing all the render commands for each mesh, I use std::sort to sort everything in descending order. I then check if an effect is currently bound and if not, bind it, else draw the mesh.

Below you can see two videos captured from various angles to show how all meshes of one effect are drawn first based on the camera distance and then the others.

Below are the screenshots from graphics analyzer showing how one effect is bound first and then all the meshes are drawn before another effect is bound. 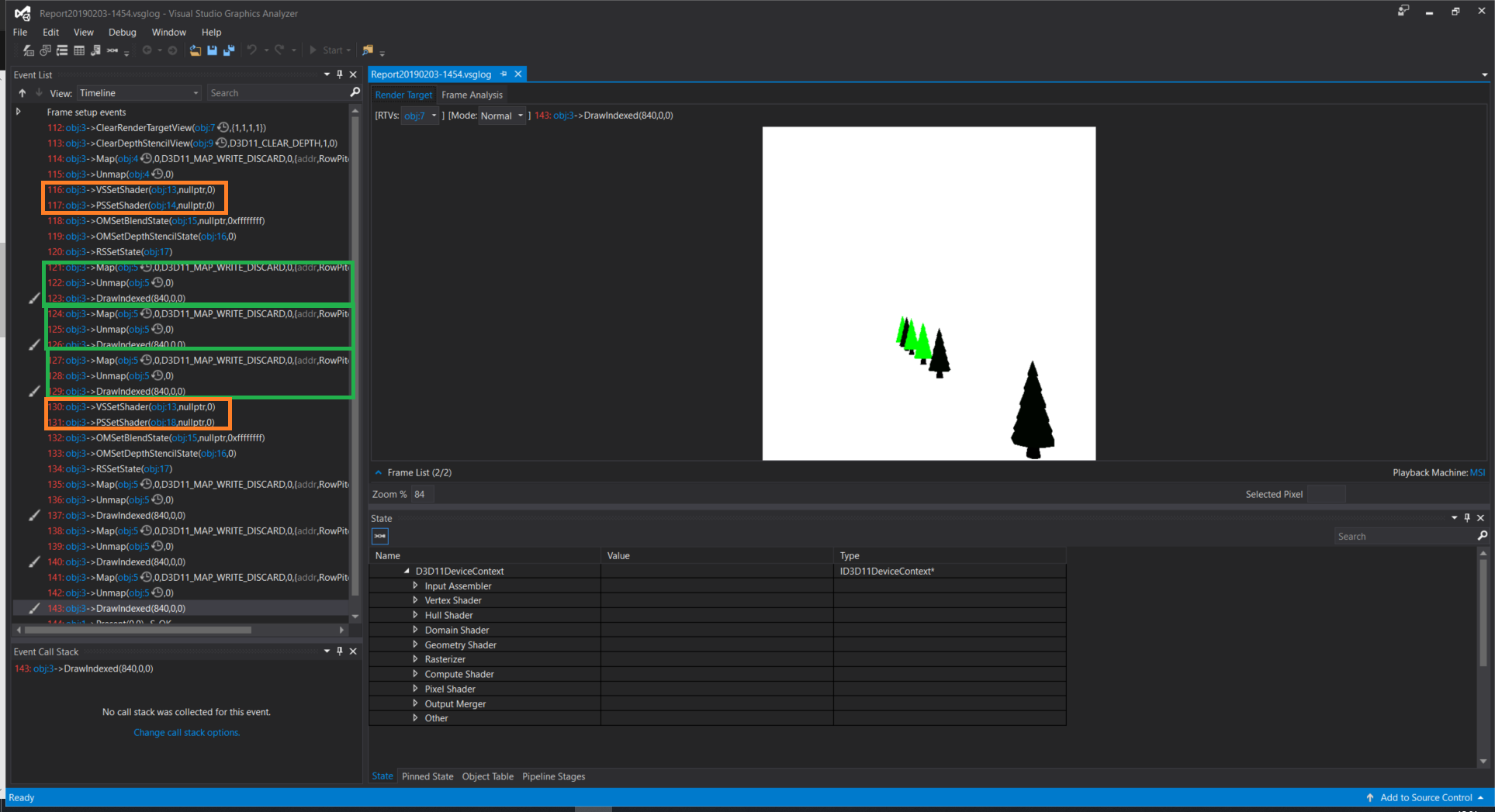 The orange rectangles highlight when effects are bound and green shows when meshes are drawn.

The graphics analyzer highlights calls which set states which are already set in the previous frame and are not needed to be set again as shown below.

This is happening because I am setting vertex buffers in the draw call to DirectX. To optimize this, I set these buffers only when I switch meshes. The output looks like this. 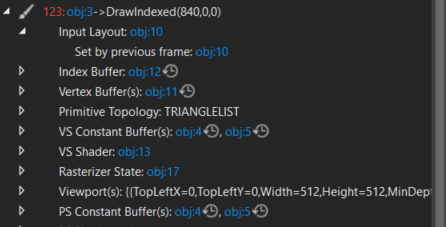