The GraphicsHelper class also has interface to change the color of back buffer. At start of every frame the back buffer is first cleared usually by setting the color to black. I created a color struct that takes in values of red, green, blue and alpha between the values of 0 and 1. This I pass to my graphicshelper.cpp using the interface “SetBackBuffer” which then sets the value for the back buffer.

Interface for changing the color of back buffer

We also added an index buffer to tell the graphics API, the order in which vertices of a triangle are to be drawn. By using an index buffer, we can reduce the number of points that are being stored for any shape as we can remove the common vertices between each triangle that is part of that mesh. But, this introduces an additional complexity when using different renderers such as OpenGL and DirectX. Since they render points in different order, index buffer for one is incompatible with the other. The way I solved this is to take the order of OpenGL as default and swap every 2nd and 3rd point in the array.

I also moved out the code to initialize the meshes and effects from their respective classes to Graphics.cpp. During the initialization from graphics.cpp the effect needs the locations of both the vertex and the fragment shaders as strings

After refactoring the code to include the changes to Graphics.cpp, my mesh class uses 28 Bytes and 48 bytes in OpenGL and Direct3D respectively. Effects on the other hand take-up 72 bytes and 120 bytes respectively. I could not find any way to reduce the size.

As an optional challenge we must animate the background color. So instead of passing a solid color value such as {1,0,0,1} for red, I passed the value of the sine value of simulated time clamped between 0 and 1. 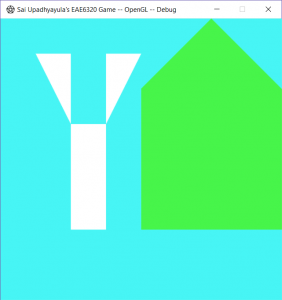 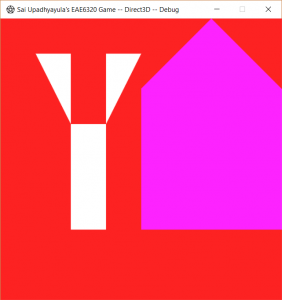